Commenting on today’s announcement (15 July) by the Ministry of Justice on plans to make changes to the Rehabilitation of Offenders Act 1974, Christopher Stacey, co-director of Unlock, said:

“Unlock very much welcomes and supports today’s announcement by the Justice Secretary. If his commitment proceeds to statute, it will mean more people with criminal records being able to get jobs and make a positive contribution to society. The current criminal records disclosure regime does little to promote rehabilitation or serve public protection, but it does result in people being locked out of jobs and opportunities, often for the rest of their life, because of a criminal record that serves as a second sentence.

“England and Wales has one of the most punitive criminal record disclosure regimes in Europe – and there’s no evidence that it’s reducing crime. Getting people with convictions into work, supporting their families and contributing to the economy is one of the best ways of making communities safer. Evidence shows that more than half of men, and three quarters of women who receive a conviction, will never be convicted again. That is why we have long campaigned for a system that enables all convictions to become ‘spent’ at some point.

“This would enable more people that have received prison sentences of over 4 years to reach the stage, after a period of living crime-free, where their criminal record becomes ‘spent’, and for many others enable their conviction to become spent much sooner than at present, within a proportionate, evidence informed timeframe. This means they will no longer be required to unnecessarily disclose it for most jobs or education courses, nor for housing or insurance.

“However, there is little point in having more people reach this stage if employers can continue to discriminate. There are fundamental questions as to how effective the legislation is in a society where information remains online and employers regularly ask about spent convictions even if they are not entitled to know about them. The government needs to make sure that the legislation does what it is intended to do – give people a chance to live free of the stigma of their past. We urge the government to use this opportunity to do that work, and we look forward to working with them so that law-abiding people with convictions have a real chance to move on positively with their lives without their criminal record hanging over them.” 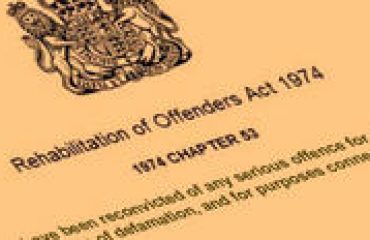 Delays to reforms to the Rehabilitation of Offenders Act 1974