On a daily basis, our helpline gets calls from people who are applying for work and don’t know where they stand because of criminal record checks that (increasingly) employers are carrying out.

The result is a detailed guide which was written by Unlock and which was circulated by the DBS (it was announced in DBS News September 2013). Download the guide here or click the image below. 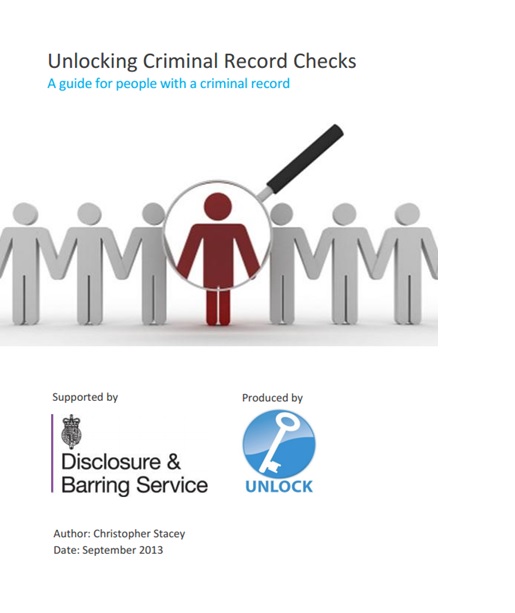 For Unlock, this guide represents a number of things:

Since the guide was published, we’ve already started getting feedback from people. A couple of examples include:

People asking questions of employers: “I went into Human Resources and asked why they were asking for enhanced checks. They wasn’t sure, and once I pointed out that a basis disclosure could be used, they were happy to accept this, and changed their policy as a result. Given my criminal record is spent, it means I don’t have to resign, which I feel I would have had to do otherwise”

People using the DBS’s ‘Eligibility query’ process: “My employer was insisting on an enhanced level check for a job working as a door-to-door salesman. I tried to talk to them, but they wouldn’t listen, so I didn’t have any other option but to consent to the check. Following Unlock’s guidance, I raised a query with the DBS, and they looked into it. The outcome of this was that the DBS wrote to my employer saying that they didn’t think that the position was eligible, and that they should do a basic level check. Result!”

This guide is an important first step, but there is still a long way to go to ensure that employers are carrying out the correct level of checks and at the right time.

We’re keen to get your feedback on this guide, and in particular if you’ve tried to make use of the advice contained it in, either in your dealings with an employer or in raising an eligibility query with the DBS.

Launch of the Disclosure Calculator