The High Court has today declared the Government’s criminal records disclosure scheme incompatible with Article 8 of the Human Rights Act.

The judgment relates to the rule that anyone who has more than one conviction on their criminal record – regardless of the minor nature of the offences, how long ago they were committed and the person’s circumstances at the time – is required to disclose them forever when applying for certain types of work that involve standard or enhanced checks.

Lord Justice McCombe and Mrs Justice Carr declared this rule unlawful under Article 8 of the Human Rights Act, the right to a private and family life.

The case was brought by Liberty and Stephensons, supported by Unlock.

Christopher Stacey, Co-Director of Unlock, a charity for people with criminal records, said:

“Unlock is delighted with the court’s decision in this important case which stands to affect many thousands of people with convictions. Since the filtering scheme was introduced in 2013, it’s helped many people with old and minor criminal records to be free of the stigma and discrimination that so many face when they have something on their criminal record.

“However, the current system doesn’t go far enough: it is blunt, restrictive and disproportionate. These shortcomings have today been recognised by the High Court and we are excited about the improvements which will follow. They will not only benefit those with convictions to move on positively with their lives but it will also contribute towards building a fairer and more inclusive society.”

The argument put forward in the case was that the current system breached rights under Article 8 of the Human Rights Act, that the system is arbitrary and disproportionate, and requires urgent reform to allow for greater consideration of individual circumstances.

Unlock has long argued that a more flexible system, which considers individual circumstances in cases of old and minor convictions, should be introduced. The defendants in this case argued that such a review scheme would be unworkable – but Lord Justice McCombe said he was “far from convinced” by this argument.

The Court has yet to decide on remedies.

“This ruling will bring reassurance for the very many people who have had their ambitions dashed because of very small mistakes they made years, or even decades, in the past.

“The Government must urgently fix this broken system, which rightly allows people with a single minor offence to move on with their lives, while those with two – no matter the nature or circumstances of their crimes – cannot.

“We are delighted the High Court has recognised the importance of the human right to privacy in allowing people to rebuild their lives.”

“The judgment of the High Court recognises that it cannot be necessary or justifiable for an individual to have minor offences disclosed indefinitely from many years ago; merely because there is more than one minor offence.

The court heard that a more serious offence of the same type would be filtered and accepted that there could not be any rationale for the disclosure of the minor offences. I welcome the fact that the court has effectively applied what is common sense to the issue of criminal records”.

One of the cases was referred to as P. In August 1999, P was charged with shoplifting a 99p book. She was bailed to appear before a Magistrates’ Court 18 days later, but failed to attend and was therefore convicted of a second offence under the Bail Act 1976. In November 1990, she was given a conditional discharge in respect of both offences. P’s two convictions relate to a very specific and short period of her life, and she has no subsequent criminal history of any kind. At the time, she had untreated schizophrenia – a condition which was later diagnosed and treated. P now wishes to work as a teaching assistant and has sought voluntary positions in schools. However with each application she is required to disclose her two convictions, which has the effect of leading to the disclosure of her medical history.

The other case was referred to as A. A was convicted of two minor crimes in 1981 and 1982 and was concerned that he would be forced to disclose his convictions as part of his current employment. The Police Act 1997 created the Disclosure and Barring Service (DBS – formerly the Criminal Records Bureau), which provides details of a job applicant’s previous convictions to prospective employers.

For certain types of work, particularly work with children or vulnerable adults, the standard or enhanced certificates issued by the DBS used to list all the job applicant’s previous convictions. However, in 2013, the Government amended this scheme following a Court of Appeal ruling (T v Chief Constable of Greater Manchester) to introduce a “filtering” process. Single convictions for non-violent, non-sexual offences that did not lead to a custodial sentence (including a suspended one) will be “filtered” (i.e. not disclosed) after 11 years (five-and-a-half years if the person was under 18 at the time of the offence).

The new filtering process does not apply if a person has more than one conviction – regardless of the minor nature of the offences or the person’s circumstances at the time.

The Rehabilitation of Offenders Act 1974, which governs the circumstances in which a person has to admit to a previous conviction if asked, operates in a similar way. A person applying to work with children or vulnerable adults does not have to disclose a conviction which is “filtered”. 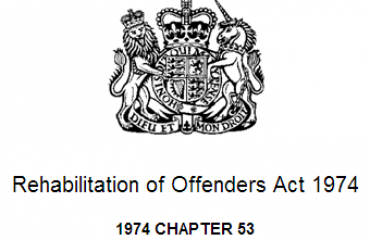 An update on the Rehabilitation of Offenders Act